From Tibet, the roof of the world in the Himalaya Mountains, originates one of the oldest (still practiced) herbal medicines.  It is the more than 2500 years old tradition of people who literally live in solitary heights.

The eldest writings in Tibetan medicine date from the 7th century AD.
In the late 19th, early 20th, this tradition – along with the herbal formulas – was introduced first to Russia, then to the Western world. This is how Tibetan herbal medicine survived to the present day.

Tibetan medicine looks at the human being from a holistic point of view, i.e. as a whole. In the first place, it focuses on the underlying causes for health problems. Its ancient writings contain this ingenious metaphor: “Not fighting the causes is as if only the leaves and branches of a poisonous tree were cut off while its roots were maintained. The tree will certainly grow on”.

Whenever Tibetan medicine tries to make out the underlying causes of health issues, it also looks at the human mind as source and preservation of healthiness. From a psychosomatic point of view, malnutrition combined with stress and negative thinking play an essential role for physical symptoms. According to Tibetan medicine, ignorance, desire, hatred, disfavor, adherence and narrowmindedness form mental poisons that distort the physical balance.

According to Tibetan medicine, the human body is composed of five elements: earth, water, fire, wind (air) and ether. Each element has a specific impact on our physical vital functions. Additionally, our body is subjected to these three kinds of energy that originate from Indian Ayurveda: wind (loeng), bile (tripa) and phlegm (pégèn). Healthiness is a matter of having these three energetic systems poised.  Depending on the energy distorted and the elements, respective disbalance can be of hot or cold changes. Organ functions can also be described as hot or cold, just like individual foods or herbs. Disbalance in the energetic system wind or phlegm results in cold symptoms while biliary disorders and ‘impure blood’ are symptoms of heat.

The Tibetan herb products are based on ancient knowledge and experience with medicinal plants and minerals. They unite dozens of individual ingredients of herbal (bark, root, leaves or fruits) or mineral origin. The plants used are dried and ground but not processed. According to Tibetan medicine, just any substance can also be harmful. Herbs that support one organ are most likely to harm another one. Consequently, one part of the Tibetan herb product is always intended to stimulate the immune system while another one serves to neutralize possible unintended reactions.  Tibetan herb formulations will usually provide for gentle healing stimuli. This is the reason why they need to be taken for an extended period of time before first results can be observed.

Is Tibetan medicine reliable? In certain scientific circles it is understood that this age-old traditional health-related knowledge has already obtained its right to exist just by its continued existence.  It seems most unlikely that generation by generation could be fooled by charlatanry. 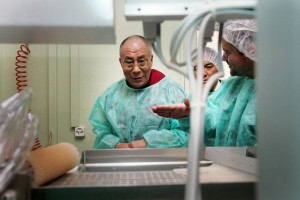 Of course scientific research is essential.  Since the 1970s, Western universities e.g. in Switzerland, Austria, Poland and Denmark have been researching on the effectiveness of Tibetan medicine to verify its right to exist.